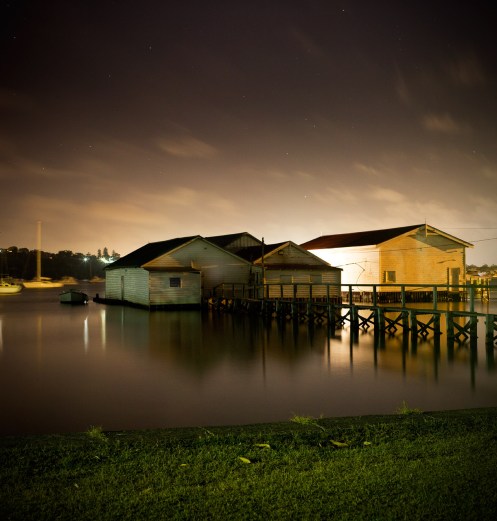 I was fortunate enough the other night to catch up with Neal from Spool Photography and Kirk Hille of Kirk Hille Photography for an end of year shoot.    We started off at Narrows Bridge and hung around there for awhile but the light was not good to us unfortunately.    After watching the sunset we attempted to take a few photos under the bridge with higher isos to see what happened.   The results were pleasing but not sensational.   We then decided to play iso wars against the Mosman Bay boatsheds which have been my nemisis for the year.

Neal and I cranked up the isos on our camera and smiled with delight at the results.   Well at least I smiled,  I was wondering how much Neal had to drink as he was jumping in the air, yelling obsceneties and giggling like a school girl.  My guess is that he was happy with his Canon 5D MkII.    I think its awesome that I’m taking these sorts of photos late at night now, but when does one sleep?   I blame this latest lack of sleep squarely at the feet of Christian Fletcher, up until now I’d be heading home an hour after the sun set, but it was 10:30pm last night when I headed home and I was still tempted to fire off a few more shots at some other locations on the way home.

Well now thanks to Flemming and Christian I can now shoot 24hrs a day!!!