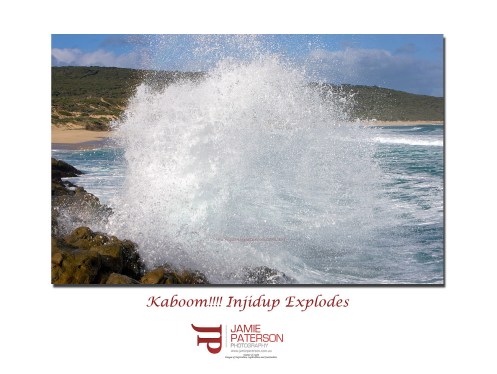 I was lucky enough this weekend to slip away down to Dunsborough for Thursday night, Friday and Saturday and it was absolutely awesome down there.   Friday night saw me at Wyadup Rocks capturing some awesome seapscapes, though when I turned around I saw that all the colour in the sky on the otherside of the cape.  Typical!!!   🙂  Friday night I went down to Canal Rocks and found some interesting areas that I hadn’t investigaged before and on Saturday morning I snuck down to Bunker Bay and had a blast.   The light was fairly subtle all weekend but the conditios wee still pretty good.   All in all it was a great couple of days.

This wave photograph was taken down at Injidup, the swell was huge and I mean scary huge and they were just exploding against the rocks, so much so that you could feel the rocks actually shaking.    It just makes you remember that the sea is such a powerful force.

What were the conditions like here in Perth?   Did anyone get out and about at all?