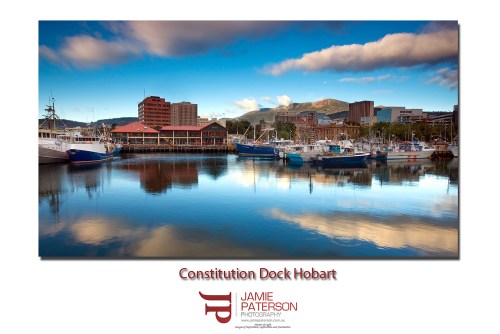 Not sure what WordPress has done to this pic to make it look soft in the small version, but if you click on the photo and view the large version its sharp.

Ok, all jokes Tasmanian jokes aside, Tasmania rocks!   I am definitely going back again this year to cover it in more detail.   I could’ve spent days in Hobart itself just taking photos alone.   This was the view that I was presented with my first morning in Tasmania and I was just blown away by it.   I was hoping for mirror like reflections in the water and to have Mount Wellington light up like it did was just a bonus.    This particular morning I also managed to get over to Salmanca Place and captured some pretty cool shots from there with Mount Wellington in the background as well.   Tasmania, a landscape photographers dream.

Hopefully Tim from Island Images will approve of this shot. 🙂

As always for those who are curious:

The roads are so steep and have so many corners that I think if I moved to Tassie I’d buy a WRX or EVO just to deal with the corners.    To give you an idea of how hard it is to get around on the West Coast, it took us almost 3hrs to travel 70kms around the Queenstown area.

Has anyone else considered a trip to Tassie and what areas did you think of shooting?

I hope you all have a great weekend.