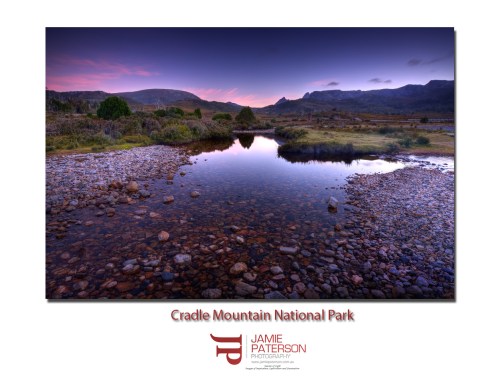 Well here it is, another shot from awesome Tasmania.    After getting some great shots of Cradle Mountain itself I was driving back out of the national park when I saw this cool little stream that was just asking to be shot so I had to oblige.   Just off to the right from centre you can see the tips of Cradle Mountain itself.   This stream was just so nice and it was running past a rustic old mountain hut, which I managed to get some photos of as well.   I know I’ve said it before but I’m definitely going back to Tasmania to try and capture its beauty properly.  I could spend four weeks in Cradle Mountain National Park easily without getting bored.

Cradle Mountain must be one of the coldest parts of Tasmania, after this shoot I went home and even though I had two sleeping bags on I was still really cold.   It was funny the next morning I got up and whilst I was shooting I met a local photographer.   I told him I couldn’t believe how cold it was and he said he thought it was really warm!   Anyhow I hope you guys enjoy this photo.  I’m really proud of it.

Did anyone manage to capture the sunset tonight (Sunday) it was another amazing sunset.