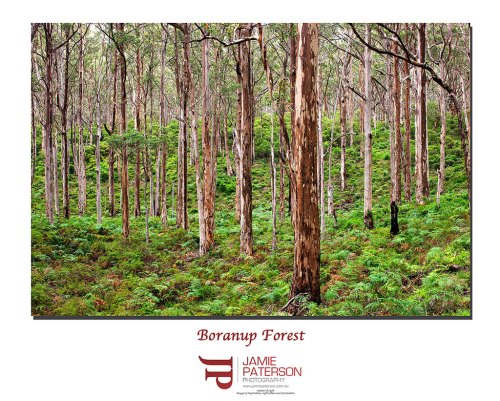 On Tuesday 21 Dec 2010 I was lucky enough to be invited along to record a charity event along with Christian and Mike Fletcher, Merv French, Peter Hodgson, Jamie Nichalo, James X and True North Mark.  It was an amazing and epic 24hrs and I’ve been introduced to a lot of new areas down south to shoot!

On the Monday night we shot the Leeuwin Lighthouse until late and fell asleep around 12am.   We were all up at 3:30am to record the start of the charity run which started at 4am.   We then followed the two runners all the way up the coast snapping shots of them as they were running along it.   I can’t believe they ended up running for 21 hours straight.  What an amazing feat.

Along the way we stopped off at Boranup Forest for a few shots and this is one of the shots that I managed to grab and I’m really happy with it.  Its also one of the few spots that I was able to hobble to during the day thanks to a torn calf muscle.

Thanks for inviting me along guys, it was great to catch up with all of you again.

Thanks for your comments,